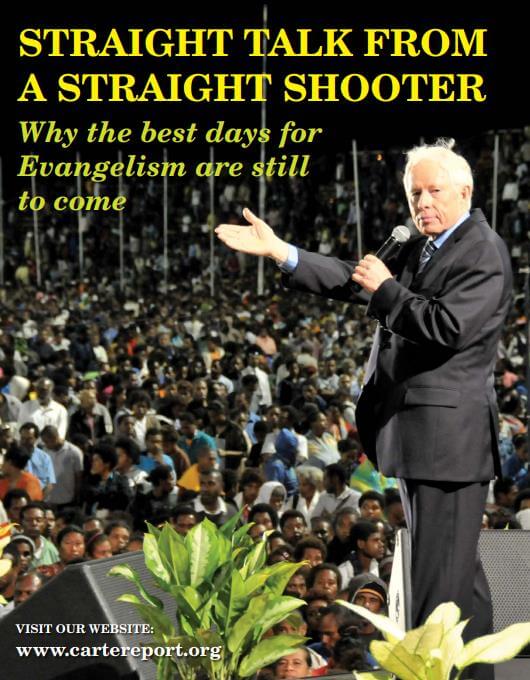 Why the best days for Evangelism are still to come

Q: Why do some church leaders say that public evangelism is finished?
A: Because it’s hard, it’s expensive, and it demands talent.

Q: Is public evangelism Biblical?
A: You had better believe it. The Christian church was started through public evangelism. Peter stood up and preached a great evangelistic sermon and thousands were converted.

Q: Is everyone called to do public evangelism?
A: No, of course not. I know some very good evangelists who go from door to door sharing Christ. Pastor John Trim, mentioned in the Adventist Review, was a tremendous soul-winner who confessed his inability to do public evangelism. He was a mighty evangelist who won souls by knocking on doors. That’s hard work.

Q: Getting back to Friendship Evangelism, don’t you think there is a legitimate place for it?
A: Sure there is, but don’t tell me that being friendly as a Christian demands a special program or strategy. We all ought to be friendly. But my message is, “Stop killing public evangelism and public evangelists!”

Q: Should church leaders do evangelism?
A: If they are genuine leaders, they will. Just sitting behind a desk is not necessarily a demonstration of real leadership skills.

Q: You are a voice crying in the wilderness. On what do you base your beliefs?
A: Strange to say, but I follow the Bible. Try reading 1 Cor. 12 where Paul the Evangelist says that the work of the “missionary” is the most important gift. Here is the inspired passage:

“And God has appointed these in the church:
first apostles, second prophets, third teachers, after that miracles,
then gifts of healings, helps, administrations, varieties of tongues.”
— 1 Cor. 12:28

“Apostles” is number ONE, and Administrations is number SEVEN. Ouch!

Q: Who is an Apostle?
A: The modern equivalent is “missionary,” a person on a mission to preach the Gospel and win souls. Apostle comes from the Greek word, “απόστολος ” that means one who is sent forth. If you spend your days behind a desk telling others what to do, you are not actually being sent forth.

Q: Are you putting down administrators?
A: Never, never, never. There would be chaos without capable administrators. But Administration without Apostles is a total disaster, and today we are killing off the public evangelists.

Q: Most folks in our church don’t like public evangelism. Why?
A: It’s hard work, relatively expensive, and gets us out of our comfort zone. Most church members do not want to be disturbed. I hope you are different.

Q: What happens when we give-up on public evangelism?
A: We become a whispering hope, and our churches become cantankerous and lazy. People have a tendency to fight each other when they engage in a lot of spiritual introspection. The Adventist Review says we are an endangered species.

Q: What should we do?
A: Don’t be brainwashed. Be a Gospel person. Be a Jesus person. Don’t be a weak conformist. Become involved in something greater than yourself.

Q: How many campaigns have you run that fizzed out?
A: By God’s grace, NONE. And I have run some of the biggest evangelistic meetings in recent times. Yes, with more people than they had at the opening of the Olympic Games and more people than attended the Beetles’ concert in America.

Q: Where are you going next?
A: Maybe the Philippines or Cuba. We have received invitations.

Q: Aren’t you tired? You are no longer a spring chicken.
A: Yes, I am often weary in God’s work but not weary of it.

Q: How can I help?
A: Come with me. Or at least support me with the funds I need to pay the bills. Do your giving while you’re living, so you’re knowing where it’s going.

Q: Who are your heroes?
A: In my book, my heroes are those people who made a real difference. I’m thinking of John Wesley, George Whitfield, Billy Graham, H.M.S. Richards, George Burnside, and Fordyce Detamore.

Q: Don’t you know you are a dying breed, an irrelevant minority? The influence today is with our institutions. Why don’t you get it?
A: They said the same about Jesus and the Apostles. The Bible says the whole earth will be lightened with His glory. Rev. 14:6-12 says that God’s final message will be preached around the world. It will be so public it is pictured as angels flying “in the midst of heaven.” That’s public evangelism. Why don’t you get it?

“Modern Christianity has been watered down
until the solution is so weak
that if it were poison
it would not hurt anyone,
and if it were medicine
it would not cure anyone!”

John McCain was not a perfect man. But as you and I know, there are no perfect people. He was a strong, principled, outspoken individual with character and integrity, and we will miss him.

Almost everyone admired his courage and patriotism. He went through hell in the Hanoi Hilton. He was tortured by the Communists, but refused to accept early release unless his aircrew could go with him. So he stayed and endured great pain and suffering. He was a brave man with an enormous sense of decency and honor. The compliments that came from all sides at his funeral were a testimony that honor, duty, and country are not dead. He was a genuine hero. He was also America’s maverick.

Mavericks like Senator McCain are needed everywhere today. Especially in the Church that so often encourages conformity and mediocrity. We are called to be mavericks for Jesus. Be all that Christ wants you to be. I believe God will have a very special place in Heaven for His mavericks, don’t you?
Now is the time to stand up for Jesus.

“For by grace are you saved
through faith, and not of yourselves,
it is the gift of God.”
~ Eph. 2:8

You may also give online at CarteReport.org.