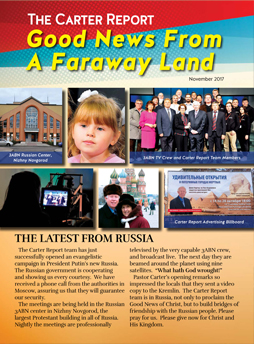 Good News From A Faraway Land

The Carter Report team has just successfully opened an evangelistic campaign in President Putin’s new Russia.  The Russian government is cooperating and showing us every courtesy.  We have received a phone call from the authorities in Moscow, assuring us that they will guarantee our security.

3ABN TV Crew and Carter Report Team Members
The meetings are being held in the Russian 3ABN center in Nizhny Novgorod, the largest Protestant building in all of Russia.  Nightly the meetings are professionally televised by the very capable 3ABN crew, and broadcast live.  The next day they are beamed around the planet using nine satellites.  “What hath God wrought!”

Carter Report Advertising Billboard
Pastor Carter’s opening remarks so impressed the locals that they sent a video copy to the Kremlin.  The Carter Report team is in Russia, not only to proclaim the Good News of Christ, but to build bridges of friendship with the Russian people. Please pray for us.  Please give now for Christ and His Kingdom.

3ABN Russian Center, Nizhny Novgorod
MESSAGES OF SUPPORT FROM AROUND THE WORLD

THE PRAYERS ARE GOING UP!

I thank you for the kind words…but there would be no 3ABN Russia without your willingness to be used of God to preach the Gospel with great power there in Russia…and inviting 3ABN to join you!
Thank you so much for such a life changing experience! We are praying that God will bless you abundantly more than you could ever ask or think through this great campaign in Russia!
Danny Shelton
President & CEO, 3ABN
United States

John Carter and Dr. Julia Outkina
Aussie Greetings to Evangelist John and Bible Instructor Beverley,
“Me thinks” that you should have been named Paul!! You preach how I imagine he did – Christ centered, with tremendous passion and solely based on Scripture. Yes, you are a Sola Scriptura, Sola Gratia, Sola Fide, and Soli Deo Gloria evangelist.
If the Bible was being formed you would be mentioned in “The Acts of the Apostles.”
The team are in our thoughts, love and prayers,
Desmond and Val Hills
Australia
“Don’t tell John it can’t be done, as there are footprints on the moon.” Also John will tell you that Bible based evangelism is blessed by God.

Eliana was baptized in 1992 during The Carter Report campaign
Dear John, Bev & Team,
You have the Lord of the Universe on your side and all your Aussie friends.
Prayers are for the Spirit to move and Jesus and the angels to protect your
health and safety.
Much love and blessings,
Pam Ludo
Australia

John Carter and translator Oleg Voronyuk
May God continue to bless, protect, lead, guide you and the team as only He can do. May He shower you and the team with grace, mercy, and favor! Thank you for allowing us to participate in this endeavor. Bless the Lord!!!
Rick Layson
United States
Dear Elder Carter,
May the legion of God’s angels be with you today in Nizhny.  Alexander Ladygin, my wife’s brother, was baptized at your meetings in 1992. Later he left the church and served in the Chechen war in 2000-2002. He had serious problems with alcohol and drugs. He was married but his wife left him. Today he is a miracle of God, has returned to church and quit his addictions two years ago through many prayers and today is very active in Christ. He will now be helping with your meetings. He has invited all his friends to come and hear you preach and three of them promised to attend. I and my family are praying for the success of your program in Gorki.
Vadim Boutov
Australia

Dear John,
Amazed at your new venture (again) into Russia. I wish you every success, and the blessings of God. Interested to know what the outcome may be. You are a brave team, and a force to be reckoned with.
My prayers go with you, and your team.
Sincerely your friend from way back,
Dr. John F. Knight AM
“Senior Australian Of The Year for 2017 NSW”
Founder and Chairman
Medi Aid Centre Foundation

The Carter Report team conducted their first evangelistic campaign in Nizhny Novgorod during 1992.  2,530 precious souls were baptized in the Volga River.  Mr. Danny Shelton, president of 3ABN came with us, helped raise the budget to pay the bills, and then built the evangelism center as a sanctuary for God’s people.  Praise God!

The Carter Report receives not a single dime from the Church organization.  John Carter says, “That’s OK, we are blessed by God!”  In Russia we pay all the bills for the campaign, help the church members, purchase the Bibles and lessons, and thank God that you, our faithful supporters, make all this tremendous work possible.  Please send your urgently needed gift of grace to: John Carter • PO Box 1900 • Thousand Oaks CA • 91358 USA
In Australia: PO Box 861 • Terrigal • NSW 2260
Sorry you won’t see this program on HOPE.  Please support 3ABN and The Carter Report as they carry the Gospel Message to the world.

3ABN team member with Daniel Burgos (center) and Terrence Giang (right)
Dear Friend,
I am in the midst of the great Gospel battle.  Last night I preached twice and the Message was carried via television to the wondering multitudes by 3ABN Russia.  I am right now feeling a little weary but my energy is constantly restored by the Holy Spirit.  Now I am preparing to leave my room and go with my little band of Gospel soldiers to the great battlefield. Please pray for us, and uphold us by your fervent prayers and offerings.
We send love, thanks and blessings from Russia.
Yours in His service,
John Carter
Preacher of Christ for 55 years, and still going strong. Beverley needs your prayers, we had to get a Russian doctor for her on Friday night.  Please pray for us.
PO Box 1900  •  Thousand Oaks CA  • 91358 USA
In Australia: PO Box 861  •  Terrigal NSW  •  2260