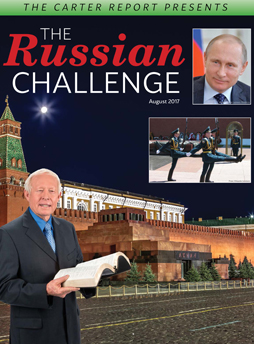 1. Is the Russian Adventist Church being closed down by the Kremlin? Fake News proclaims that the Adventist Church, like the Jehovah Witnesses, is being closed down. Dr. Kaminsky, leader of the Russian Church, reports there is no truth to this story. The Adventist Church has been in Russia for more than 100 years and is respected by the Government. An Adventist has been elected to serve on Mr. Putin’s Church-State Council.
2. What is now allowed? The rules have recently been changed. A foreigner can no longer preach and do evangelism in Russia without a special Missionary Visa. Russia is deeply suspicious of the West, in the same way that America is distrustful of Russia. Before conducting evangelistic meetings, we must seek and obtain the approval of the Kremlin. We are confident as a non-political, honest and ethical organization, that we shall obtain the special Missionary Visas. We will then have the right to advertise our meetings on television, radio, and in the newspapers. All the ads must carry disclaimers stating that we are a Missionary organization and that we are seeking to win people to our beliefs. People who come will certainly know what they are in for.

3. What are our plans? To preach Christ and the great truths of the Bible. We have no desire to meddle in politics. We are motivated by a love for God and the Russian people.
John Carter has been to Russia and Ukraine 47 times and has a calling from God. This is not a sightseeing tour. We are going on a divine mission. It carries some dangers.

4. Why do Russians love Mr. Putin? Because they think he is a strong leader who is making Russia great again. We were there when the Soviet Union came tumbling down. We saw the turmoil and trauma. We witnessed the poverty, hunger, and disillusionment. Mr. Putin in the eyes of the majority of Russians is a positive factor in their lives, a man who is restoring Russia’s fortunes. They feel much better off under his presidency.

5. What are Russians like? They are people like you and me, with one major difference. They have seen more suffering than we can comprehend. For 70 years they suffered the hell of Communism and Militant Atheism. Some 50,000,000 Russians were killed by the Communists, many tortured, starved, and beaten to death. The Bible has been kept from them. John Carter believes he has an obligation to go. This may be our last trip to Russia.

Preaching now without a break for 55 years.

Some would wonder why we would wish to go to Russia at this time, especially when the political situation is so bad and there is so much distrust on both sides. But we are not involved in politics and believe we have a higher calling. We go to preach the Gospel of Christ, just as He came to an alien and hostile world to save us.
The Church in Russia wants us and needs us to come. They have issued us with letters of invitation, and are working with the authorities to secure permission. We are confident that God is opening doors. This could certainly be our last evangelistic campaign in this great nation that seems to be closing its doors again to the West. The need is great. There are souls waiting to be saved. We are responding to the Macedonian call, “Come over and help us.” (Acts 16:9)
We must raise at least $300,000.00 to carry out this difficult mission. I am asking you, dear friend, to help us so we can help them. I have a feeling this could be our last campaign in Russia. Please write soon and do your very best for Jesus. You are part of a chain of mercy let down from Heaven.
Thank you in Jesus’ name,
With a grateful heart,
John Carter
The Carter Report, Inc.

A Stone Crying Out 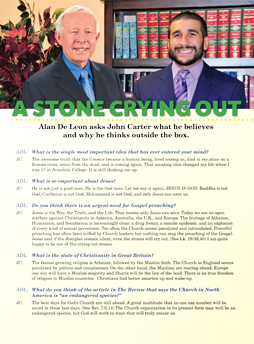