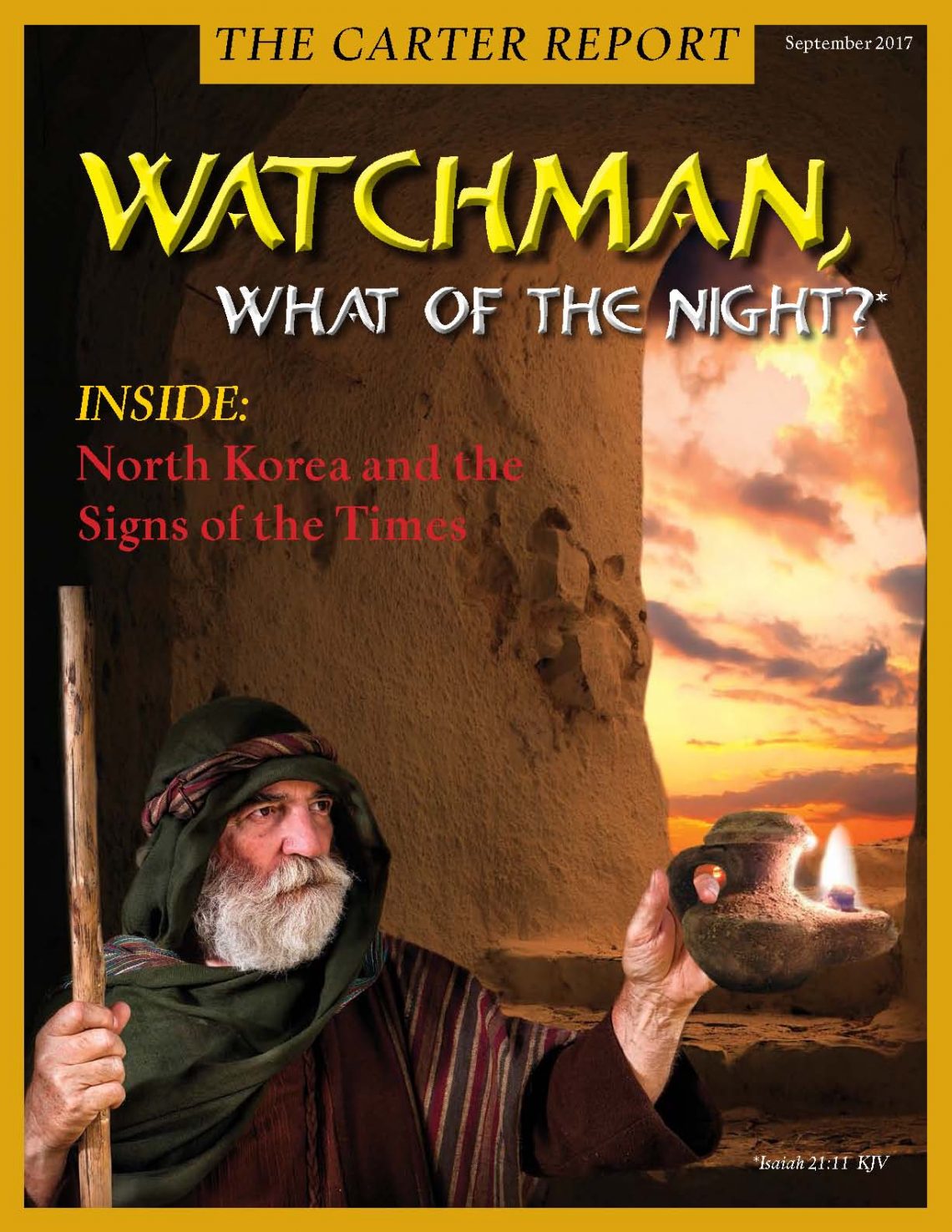 NORTH KOREA AND THE SIGNS OF THE TIMES

AN INTERVIEW WITH JOHN CARTER

Conducted By Susan Piraino, The Carter Report / Director of Communications

SP: How serious is the North Korean threat?

JC: Probably more serious than the Cuban Missile Crisis that could have ended in a nuclear exchange. Since then, the Doctrine of MAD (Mutually Assured Destruction) has kept America and Russia from tearing at each other’s throats.

SP: What is so different today?

JC: North Korea is quite different to Russia. The North Korean leader is belligerent and irrational. He’s like a spoilt six-year-old child, armed with a machine gun. The American people have been continually assured that Kim Jong Un would never be allowed to get nuclear weapons. Now he has weapons that could reach us. Our survival is at stake.

SP: How serious would a war on the Korean Peninsula be?

JC: Millions would die, including many of our soldiers. If a missile hit Los Angeles, probably more than a million would die. It would be catastrophic.

SP: What else is different to the Cuban Missile Crisis?

JC: More nations today have nukes: China, Pakistan, India, and Israel. Back in the scary days of Castro and Khrushchev, only America, Britain, Russia, and France had nuclear arsenals. These nations were stable and rational. Today, a nuclear war with North Korea would probably involve Russia, China, and America, and the other nuclear powers. It could destroy much of the planet and kill 500,000,000 people.

SP: Are you trying to scare us?

JC: Not at all. We would be foolish not to consider the real possibilities. Ellen White once saw in a vision, balls of fire destroying great cities. I think we all need a wake-up call. The Christian Church is sleep walking. We need to get ready to meet God. We need to get our priorities straight. The deceitful teaching of the Rapture with the Church escaping the Great Tribulation has lulled millions to sleep. We now have dead preachers preaching to dead congregations. They have eyes but cannot see, and ears but cannot hear.

SP: Are there other signs of the approaching End?

JC: Yes, there are many. Time will not allow us to talk about Climate Change, the melting of the glaciers, the Drug Epidemic, and the war against God in the great universities where millions of our young people are brainwashed with Atheism, Meaninglessness, and Darwinism.

SP: What about the preaching of the Gospel?

JC: Just in China alone, we are seeing an explosion of Christianity. This is happening in spite of a persecuting government. There could now be 100,000,000 active Christians in Communist China. This is a miracle of grace and a fulfillment of the words of Jesus.

SP: What is your message to the Church?

JC: Prepare to meet God, because He is coming. Read your Bible everyday. Be ready to die. Do evangelism and support evangelism. Look for a church where the pastor is on fire for Jesus.

SP: What are your plans for the future?

JC: To live what I preach, and to preach the Word while I have breath. I plan to rage against the night.

Never before in the history of the great American Republic has the nation been so divided.  Never before have crises of so great a magnitude confronted our nation’s leaders.  Now is the time to seek God in prayer, forsake our sins, and proclaim His Holy Word.  Washington DC, named after the resolute founder of the United States, needs desperately to hear again the Living Word of God.  The Carter Report accepts the challenge and is now stepping out in faith and broadcasting on FOX WTTG in the nation’s capital.  God is opening doors and we are seeing His hand of grace stretched out to save His people.  As you support this great work, you are truly God’s partner.  Thank you!

Now you can watch John Carter “classic” sermons preached with power back in the 1990’s. Available on our Carter Report Channel on ROKU.

As this newsletter goes to print we await the response of the Russian government concerning our special Missionary Visas.  Please pray for Russia.

As I write, relationships with Russia are approaching Cold War status. The situation is becoming increasingly dangerous. Nevertheless, with God, we need not fear. “God is our refuge and strength.” The greatest obstacle with Him is like a gnat in the wind or a pebble on the beach.

Unless we are stopped by Moscow or Washington politics, we plan to move ahead with the evangelistic campaign in Russia. We seek your prayers. We are not involved in politics, we seek only the salvation of souls.

Right now, we are applying for Russian Government Missionary Visas. Without these special visas, we would be forbidden to preach, teach, or witness. Even with these visas, public meetings by Americans in Russia could be perilous. We also must raise $300,000.00 for the meetings. We are hoping you will support us by your prayers and offerings. This could be the most challenging and dangerous mission of my life. Please pray for us, and please send your gift for the saving of lost souls.

May God bless you and keep you in His love,

Thank you in Jesus’ Name,

P.S. Today I discovered that the man who played Moses in the “Ten Commandments” was born John Charles Carter. His mother later married a Mr. Heston, and his name was changed to Charlton Heston.  I am confident that the God of Moses and Charlton Heston will open the Red Sea for us. Please walk with us into the waters and see His mighty hand revealed.